Well the first thing we wanted to make sure we did when taking on the classic hip hop expander commission was to make it as authentic as we could and at a basic level this started with the samplers.

We knew we wanted to use old skool hardware samplers wherever possible before feeding everything into the computers to add some of that highly prized (well by us anyway) dirt and grit. On top of the want list were two classic contenders; The Emu SP1200 and the Akai MPC60. Both machines were the foundations of early hiphop productions offering both gritty 12bit sampling and sequencing features. In the end we chose to go with the Emu as we already were using a couple of Akais in the sonic armoury (more on those later). At this point we'd like to report on having a pristine SP1200 nestling in GCHQ but in reality these units are both rare and expensive so we had to make do with hiring one for a few fun filled days.

The Emu SP1200 was released in 1987 as a successor to the SP12 (which had shorter sampling time and built-in drum sounds), sample time is small (4 'zones' of 2.5 secs) but the 12 bit resolution gives the machine a fantastically gritty sound. Because of the limited sample time, the standard technique was to record breaks and samples from vinyl at 45 rpm with the pitch at +8 and then pitching them back down within the SP1200. This adds yet another layer of dirty magic to things (whilst saving vital sample time). We used this technique by either pressing our samples to a dubplate or speeding them up in Soundforge before feeding them into the SP1200.
Compared to modern computer based sequencers and samplers the SP1200 is both rude and crude but that's what gives it its charm. The strict limitations force you to be creative in the samples you use and whilst we can't admit to coming anywhere close to mastering the beast in the limited time we had it, we did enjoy every minute of it. 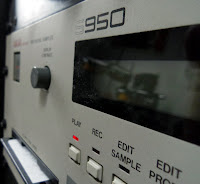 To accompany the Sp1200 we also broke out a couple of Akais from our own sonic armoury; an MPC 2000 and perhaps more interestingly an Akai s950. The S950 was released in 1988 and was the upgrade to the Akai S900, which was Akais' (and the worlds) first truly affordable rackmounted digital sampler. The s950 is still 12bit, with a sampling rate of 7.5 - 48 kHz and underpinned dance music in all its forms for years. Once again not exactly that intuitive compared to what we use nowadays, the S950 is great for adding that 12bit sampling authenticity and its pitching and timestretching tools were perfect for that classic hip hop/crate digging vibe.

Posted by Groove Criminals at 10:43