Back to the old skool 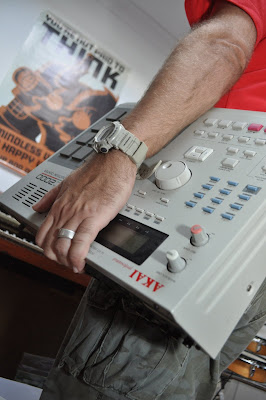 Yes we know, another couple of months radio silence.

We have an excuse. No really.

Amongst the usual monthly sample goodness we cook up for our friends at Future Music and Computer Music magazines (look out for FM issue 245's set of 'Juke' samples, we had some fun with those), we also have been working on a classic hip hop expansion pack for the Geist sampling drum software from our mates at FXpansion.

This is the project we hinted at in this very blog back in June and rather chuffed we were to be asked to put it together. With most of us being of a certain 'vintage' to be around when the first few hip hop releases hit these shores from over the pond, it's hard now to express the excitement that this fledgling musical genre brought with it. From scouring the record shops (remember them?) of East Anglia for the latest 12" imports, standing radio aerial in hand in the only place in the house to pick up the faint beats of the capital rap show (no DAB back then) to being the only B-Boy in the village. The Hip Hop of the 80's and 90's not only changed the face of popular music worldwide but changed our lives as well.

These early years of hip hop not only gave us our first introduction to samples, funk, soul, breakbeats and digging for loops (a love affair that's still on going) but also our first faltering steps into beat making and production. Without its influence we wouldn't have made our first beats, saved for our first hardware sampler, made our first demos, released our first tracks (instrumental and vocal hip hop) and enjoyed our various short and brilliantly unsuccessful recording careers.

Sure, our musical remit has changed somewhat today and we'll not get drawn into a glory days vs modern hip hop slanging match and of course "it's not where you're from it's where you're at" that counts but it's nice to go back and relive it sometimes....The heads might be older but the hearts still got excited and those shell toes never go out of style, well as far as we're concerned anyway ;)
Posted by Groove Criminals at 09:50