4 months! Bloody hell that's bad even for our rather lame selves.

OK, no excuses (although we have been very busy ;) but rather time for a speedy catch up on all things Groove Criminal.


GCHQ v2 is completely up and running now and after a few months we've settled in nicely and it's really being to feel like home. To be honest it's a home away from (well within MR Hoodee's) home as it is because we spend so much time there, but it's good to have some where permanent with such a great vibe about it. Needless to say we could do with a bit more room as we seem to have filled what seemed like a huge space with loads of audio tat but we'd have done that with a warehouse!


Work-wise we've been pretty busy as well with some interesting projects (see next post - hopefully ;p) but we also had a bit of a crash and burn moment thanks to pulling a few too many hours over a prolonged few months so had to have a couple of weeks away from the studio. Not complaining though, as it's not as if we have to dig coal for living or anything (no heavy lifting, just heavy beats, is one of our mission statements ;) just pushed a little too hard for a bit too long, as you do. 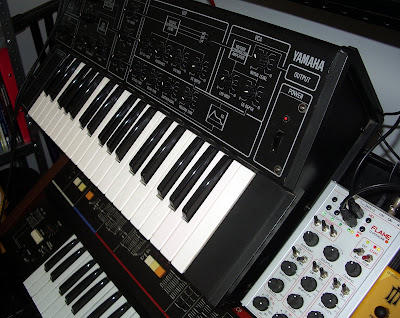 On the gear-porn side we finally got introduced to the shadowy, man of mystery (he's not like that at all really :) that fixes/cares for the vintage gear of a mate of ours. This basically allowed us to finally get some stuff fixed including getting the 4 or so keys replaced on our Yamaha CS5 mono synth.

One of the first true analogue synths we got hold of, she had a gappy smile when we got her, but it's nice to see her finally in one piece. With the LP/BP/HP switch fixed as well! No more random filter choice for us then.

Although not exactly a must have on most peoples wish lists, we've a soft spot for the CS5, it's got a character of its own and the bonus of an audio input to run stuff through the filters and we don't use it anywhere near as much as we should.


Yamaha CS5 by groovecriminals
Posted by Groove Criminals at 13:51