Just completed a couple of weeks of audio nuttiness for Future Music and thought we'd cover what we'd got up to in a bit of depth here. 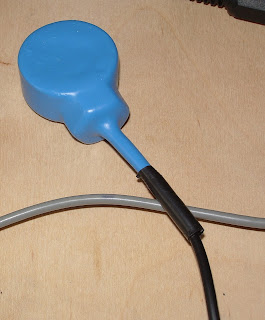 First up we grabbed a hydrophone off Ebay -basically a piezo transducer (or contact mic) covered in waterproof liquid rubber, a hydrophone picks up vibrations in liquid rather than in the air (like a normal microphone).
With the blue wonder in hand alongside our trusty M-Audio Microtrack field recorder we headed out into the local countryside to chuck it in the river. Okay, okay, we did flush it down the bog first, as you would. Although this isn't as easy as it might seem as clonking the mic on anything (like white porcelain) causes nasty spikes/clips in the recording - so basically you have to have your hand down there as well....
Anyway back to the great outdoors and after dangling the mic into a slow-moving from a low bridge we hit on the first slight problem - there's not alot going on under the water, so there's not alot going on in the end recording either.
This was soon resolved but heading to the local weir just down the road from GCHQ and dangling it in the fast flowing water. Because of the long cable we could also throw it in and record it going over the weir and into the bubbling current. These more interesting results began a quest for bubbling streams, mini weirs and fast runs of water - resulting in Mr Hoodee standing knee deep in a stream being watched by an interested swan and the whole of the local playgroup out for a walk! 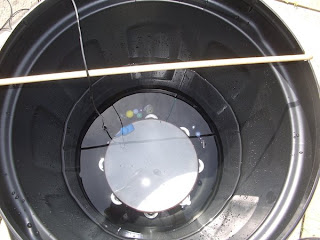 When we'd exhausted all our local rivers and streams we moved on to more experimental mucking about. Like the submerged tambourine in the plastic dustbin of water to the right. Marbles (an old GCHQ standby) were then thrown, dropped and flicked into/onto the bin. There was also a few minutes of utter madness involving an electric whisk which definitely carry a DO NOT TRY THIS AT HOME KIDS warning.
This was then followed by glasses of tonic (gin-less I'm afraid), splashing about in the bath, the washing up bowl and British summer weather. All good fun!
If you'd like a quick preview of the sort of sample we came up with using the hydrophone head over to here where there is a couple of downloadable tasters.
Posted by Groove Criminals at 22:30